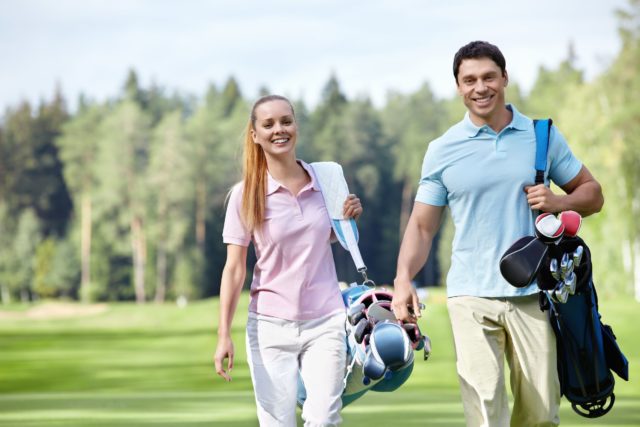 A husband reluctantly agreed to play in the couples’ alternate shot tournament at his club.

He teed off on the first hole, a par four, and blistered a drive 300 yards down the middle of the fairway.

Upon reaching the ball, the husband said to his wife, “Just hit it toward the green, anywhere around there will be fine.”

The wife proceeded to shank the ball deep into the woods.

Undaunted, the husband said, “That’s OK, Sweetheart” and spent the full five minutes looking for the ball. He found it just in time, but in a horrible position. He played the shot of his life to get the ball within two feet of the hole. He told his wife to knock the ball in.

His wife then proceeded to take her putter out and knock the ball off the green and into a bunker.

Still maintaining composure, the husband summoned all of his skill and holed the shot from the bunker.

He took the ball out of the hole and while walking off the green, put his arm around his wife and calmly said, “Honey, that was a bogey five and that’s OK, but I think we can do better on the next hole.”

To which she replied, “Listen asshole, don’t bitch at me, only 2 of those 5 shots were mine.”

I’ve never had a dream go this far, so I can’t really say it’s a dream come true.